Your business case may require an App whose primary responsibility is to orchestrate the firing of Actions on a large number of Records. The Earn Badge Action can be used to support workflows that require orchestrator Apps by providing visibility into the progress of work across these Records and information on the success or failure of that work. Workflow following the conditional success or failure of a batch of work is also supported by this Action.

A good use case for the Earn Badge Action is a budgeting process, where forecast values must be recalculated on a monthly basis. With an Earn Badge Action, an App Creator can configure a Portal Widget to display on the orchestrator Record which shows how many forecast Records are pending an update, how many were successfully updated and how many failed an update. When all forecast records have been recalculated, a Conditional Action can send a success or failure email to the user that is responsible for managing this monthly process.

Note: The Earn Badge Action is still in beta testing. For the time being, it continues to undergo changes that may break the configuration and require you to manually adjust your Action's setup.

How the Earn Badge Action Works

Often the Orchestrator App and the Target App have a parent-child relationship, where the parent has a long list of children that it is responsible for orchestrating the triggering of Actions on. However, your use case may require that the Orchestrator App and the Target App are not related, or alternatively, that they are the same App; that is, the App the Earn Badge Action is configured on triggers Actions on itself.

What is a Badge?
When the Earn Badge Action first fires, it issues a "badge" for each of the target Records. Badges are never seen by either the end user or App Creators; rather, they are maintained in a background database and are responsible for tracking the status of the Actions the orchestrator App must trigger for each target Record. A badge can either be in the state of Pending, Working, Success, or Failure. App Creators can use special Liquid Filters to access information about the status of badges. (More on these Filters later).

For instance, your Earn Badge Action may be configured to fire an Update Transaction Action and an Add Comment Action on each target Record. The target Record's badge will be in a state of Pending when it first receives the badge, a state of Working while the Update Transaction Action and the Add Comment Action are being triggered on the Record, and either a state of Success if both Actions were completed successfully on the Record, or a state of Failure if one or more of those Actions resulted in an error and failed to complete.

Once the orchestrating Record has this badge, it can optionally trigger one or more Actions on itself. A customizable Condition can also provide criteria that will conditionally fire Actions based on whether the Earn Badge Action was successful or not successful as a whole.

1. Turn on the Badges Beta Features

The Earn Badge Action is still undergoing beta testing. Before configuring this Action, you should be aware that breaking changes may be made to this feature's code and may require you to manually change this Action's configuration.

To turn on the Badges Beta Feature, navigate to your corporation's Administration page and select Edit Corporation from the left-hand menu.

Select Update to save.

Navigate to the Actions node of your Orchestrating App.

The configuration of this Action is highly customizable. We'll run through some tips for configuring the available properties and then show a quick example of a possible configuration:

Let's look at an example configuration quickly. In the screenshot below, we're configuring an Earn Badge Action on an Orchestrating App that is responsible for executing some Actions on a Target App: 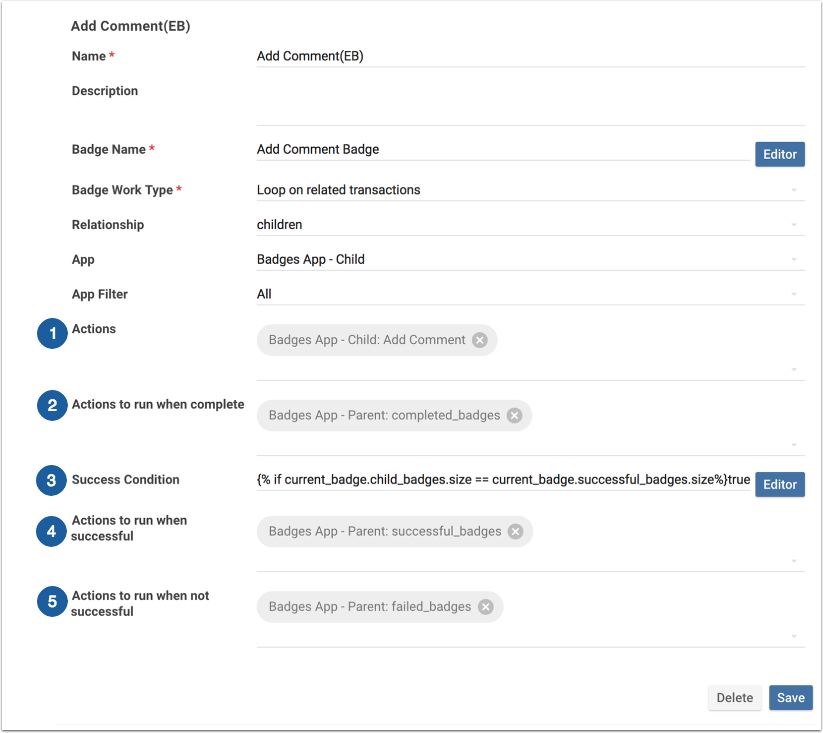 3. Configure a Portal Widget to Visualize the Action's Results

The last thing you'll need to do is configure a Portal Widget that will provide your end users insight into the progress, success, and failure of the Earn Badge Action.

You'll want to use the following Liquid filters to retrieve this information:

Below is some HTML that will build out a very simple Widget to get you started. However, in more advanced configurations you may use Liquid and Javascript to create a more dynamic presentation for this information:

Below is a screenshot of that Portal Widget rendered on the View Page:

For help configuring a Portal Widget, you can check out our Customizing View Pages with Portal Widgets tutorial.

4. Add an Action Button to Fire the Action

Your Earn Badge Action can be triggered as part of your Orchestrating App's workflow but it is most common to configure an Action Button to fire it.

For purposes of this tutorial, we have created an Action Button named Earn Updated Badge.

For help configuring an Action Button, check out our Creating a Button to Execute an Action tutorial.

That's all there is to setting up a basic Earn Badge Action.

You can test out your configuration by hopping over to one of your Orchestrating App's Records and using the Action Button. Notice that your Portal Widget's data will update at minimum every five seconds, displaying how many badges are still pending, are successful or have failed.