Perhaps the most common use case for an Onit App is that of an approval process. Whether you’re building a basic approval workflow for expense reports or a super complex contract approval process, the core Onit building blocks that you’ll need (primarily Phases and Roles) all operate based on the same rules.

In this tutorial we’ll build a basic approval process from scratch. Once we’ve finished you’ll have a firm grasp on how to tackle approval processes of all shapes and sizes, from simple to complicated. Let’s get started!

Start by creating a new App. If you need help, see Building Your First App.

It’s critical that you understand all of the material in the Building Your First App tutorial before proceeding.

Our example workflow will handle contracts that need to be approved by various people. Our approval process will be: 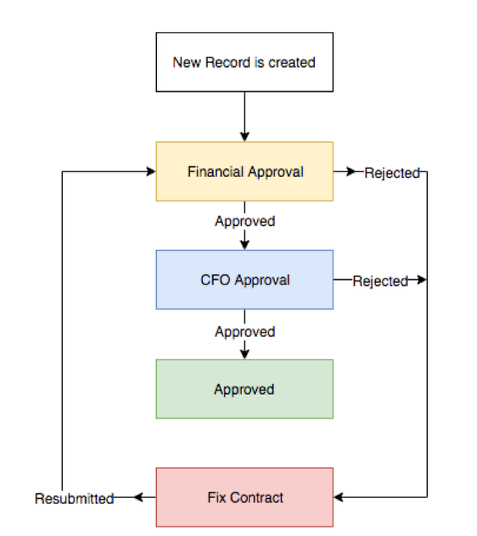 Each colored box above represents a Phase in our App. Here’s a breakdown:

The Approved phase is terminal when a Record reaches this Phase its lifecycle is complete.

Our App will have three Roles: 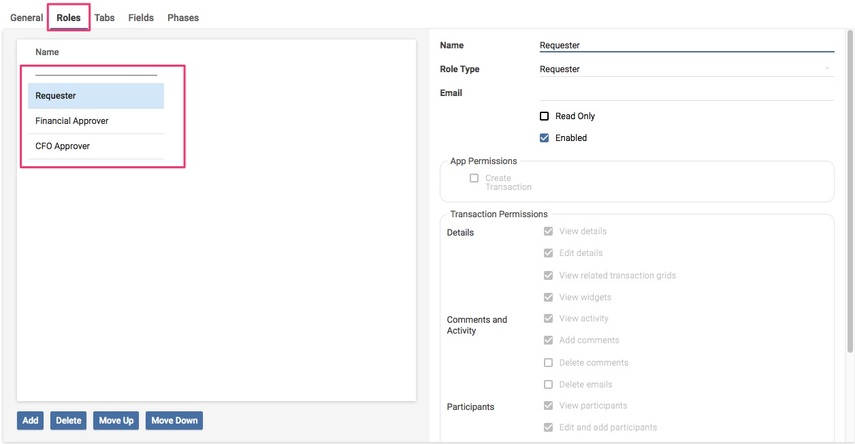 In the above screenshot  which shows all of the Roles in our app notice that the Email initial value property (on the right) has been left blank (that’s true for all Roles).

For more information on Roles see the table at the bottom of this tutorial.

It is only appropriate to hardcode an email address here if the Role will always be filled by the same person (for each Record). When that’s not the case (which is the majority of the time), you should use an Action to dynamically populate Roles, using lookups and rules.

In the Wizard, browse to the Fields tab. Add a contract_amount Field of type Currency with USD as the currency (as seen in the screenshot below). We’ll use the amount entered into this Field to determine who the Financial Approval Role will be assigned to (Jim or Pam).

When it comes to building approval workflows, much of the heavy lifting is done on the Phases tab. As a result, we’ve dedicated an entire section of this tutorial (up next!) to this tab.

First, we’ll create and name all of the new Phases that we need.

It’s important to list Phases in the top-down order in which you want Records to flow. In other words, the first Phase listed in the Wizard is the first Phase that all Records will enter upon their creation. As seen below, there are Up and Down buttons that allow you to set a Phase’s order. 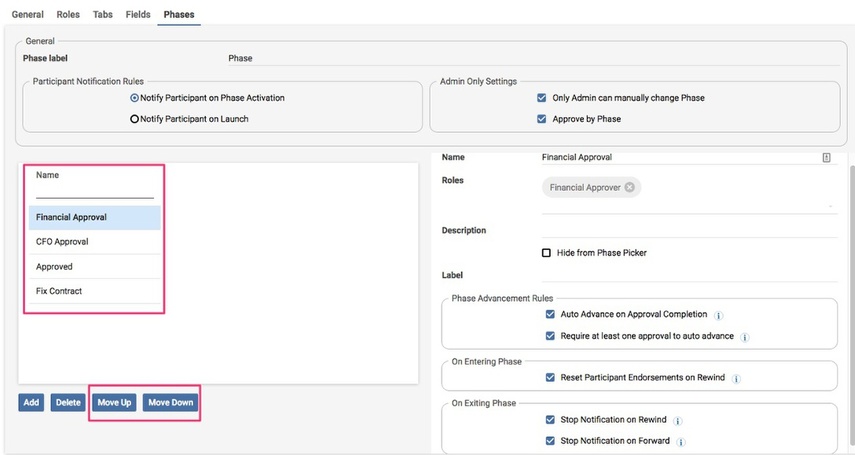 Next, let’s configure our Phases. Onit provides many granular options to control the behavior of each Phase  while this is a good thing from a functionality standpoint, it also means that you have a lot of choices to make.

In the screenshot below we’ve numbered each individual configuration option in the Phases tab. 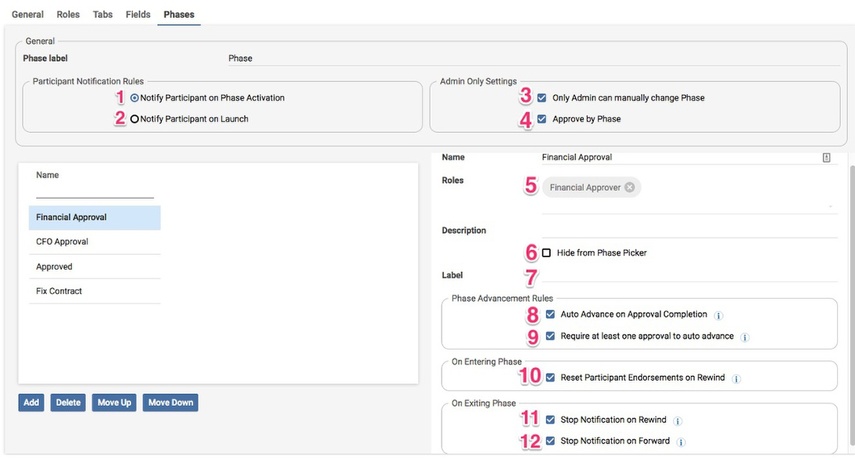 Let’s break down each configuration option by number:

In this context, “non-administrative” refers to any user that is not a System Administrator and also is not a Participant under a Role of type of Administrator.

Every heard the term “phase-gated”? That phrase refers to Apps where this option is selected. In other words, selecting the Approve by Phase checkbox makes the App phase-gated.

If you select the Approve by Phase checkbox, all Participants will be visually organized (on the Record’s View Page) under a Phase name. See the example screenshot below. 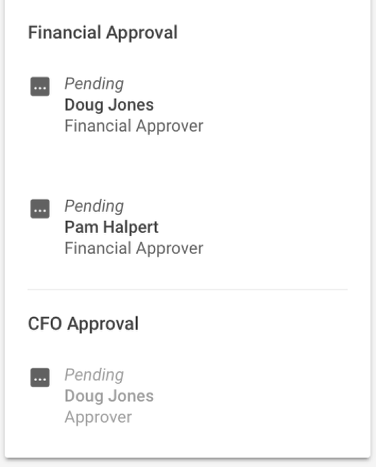 The most common reason that you assign Roles to Phases is for approval purposes. By doing so, Onit automatically shows Approve and Reject Buttons to Participants under this Role (when the Role is activated). That said, you can assign any Role of any type to a Phase, to indicate that they have work to do.

Note that if the Record does reach the phase via automatic processes, users will see the phase name (not the label name); it's up to the App creator to make sure that doesn't happen if it's not wanted.

Note that this applies only to the display on the view page: the App dashboard grid column "Phase" will still display the phase name (not the label name), and the Liquid variables {{ phase }} and {{ curr_state_name }} will still give the phase name as their output.

Now that you understand each Phase option above, below is a detailed breakdown of how we will configure our example contracts App.

When you’re done configuring your App, publish all of your changes and close the Wizard.

Building Workflow in the Advanced Designer

At this point, we’ve configured all of the appropriate settings in the Wizard. Even so, our App doesn’t actually do all that much. In fact, if you were to create a test Record it would fall through all of the Phases to Approved. Why is that the case?

This happens because Onit doesn’t know the specific people that should play each Role. Whenever zero Roles associated with a Phase are populated, Onit skips the Phase entirely.

To fix this, let’s move into the App’s Advanced Designer page. We will begin by writing some Conditions.

In the sections below we’ll create Conditions and Actions, which at first won’t actually do anything. Creating these objects on their own may seem a bit confusing at first  if so, not to worry! Later in the tutorial we’ll tie everything together, assigning the Conditions and Actions to various other objects to provide a holistic solution to the overall business problem. Stick with us!

Create the three Conditions shown in the following screenshots:

In the steps below, we’ll assume that you are generally familiar with how to create Actions in Onit. If that’s not the case, check out our Creating an Action tutorial before proceeding.

Create one Action to handle what happens when an approver rejects the Record. This should be a Change Phase Action that matches the screenshot below:

Create another Change Phase Action, this one to allow the requester to resubmit a Record after it has been corrected:

You may be thinking, “Hey! Wait a minute! All of the Actions above are simply hardcoding email addresses for each Role! Why do we need Actions for this? We could have just hardcoded these Actions into the Builder!” You’re absolutely right! While we’re keeping things simple in this tutorial, in the real world we would replace the hardcoded email addresses shown above with Liquid lookups. These lookups would reach into an Onit App or list to identify the best person perform this approval. In case you need it, here is the syntax to perform a Liquid lookup.

Create the four Business Rules shown in the following screenshots:

Not familiar with creating Business Rules? See our tutorial on this topic.

When an approver rejects the Record, we want to move it to the Fix Contract Phase. Once the Record has been corrected we want the requester to re-submit the Record for approval. To achieve this we must provide the user with a Button.

Create the Button shown in the following screenshot:

To test, you must log into Onit as each active approver (e.g., Financial Approver, CFO Approver)  one by one. If you are not logged in as the active approver you will not see the Approve or Reject Buttons. 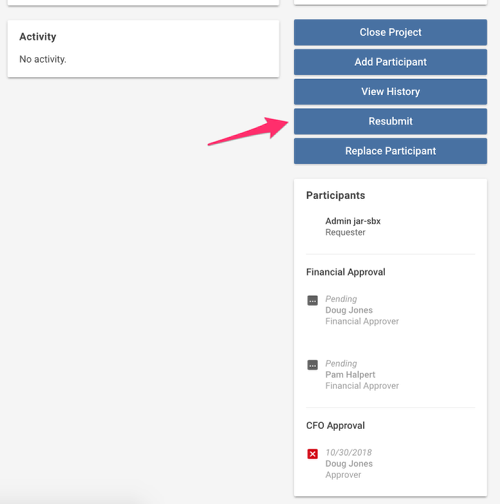 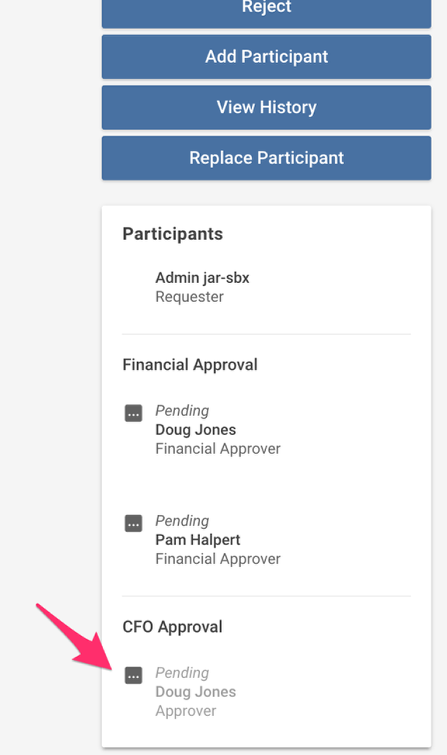 The ellipses icon next to Pam’s name allows any Participant on the Record to approve by proxy the Record for an approver. The first screenshot below shows the “approve by proxy” pop up that will appear after clicking the ellipses. Once submitted, the proxy approval will be recorded on the Record’s history, with the proxy approver’s name, the intended approver’s name, and any approval comments (see the second screenshot below).

Once a role is implemented and Records are created, you cannot change the Role Type of an existing role. Instead, you should disable the role and create a new one.